Know Where You Are Going

Know Where You Are Going

“You have to be careful if you don’t know where you are going, because you might not get there.”—Yogi Berra

As always with Yogi, the more you think about his seemingly inane comments the more you realize the depth and wisdom they contain.

As an Implementer member of the EOS Worldwide family, one of the first things I do with a new client is encourage the leadership team to look out into the future and set a really big goal. As Jim Collins called it, A Big Hairy Audacious Goal.

I ask them to pick a time frame, suggesting they choose 10 Years in the future. Depending on their circumstances, they pick from 5 years to 20 years or  occasionally even longer.

Some resist. They ask:  “How can I have any idea where we’ll be in 10 years?” “ It’s just a guess so why bother?” or my favorite, “I have no idea where I’ll be next week and you want me to predict 10 years in the future?”

It’s an interesting exercise for those who dive in as well as those who resist to sit back and do something they haven’t done before, take a careful look out into the future and think about where they’d like their company to be. Not by doing financial projections based on some annual rate of growth or other extrapolation, but by just closing their eyes and seriously thinking about what they can achieve with total focus and an exceptional unified team effort.

Since I found and now share this marvelous quote from my favorite business guru, Yogi Berra, getting the leadership team fully engaged and enthusiastic about determining their destination has become a simpler process.

Don’t wind up like so many, wandering into the future with no destination in mind. You don’t want to wake up one day, look back and realize that with a big hairy audacious goal you too could have achieved so much more. 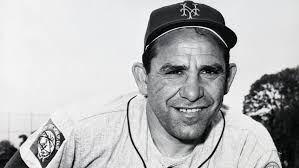