If you’re like most people, you have a lot to do. As fast as you get one thing done, five more things needing your attention “right away” have been dropped on you. Unanswered emails pile up, texts come in non-stop, the phone is ringing. And, if you’re like me, your friends, your clients, and the members of the groups you belong to all seem to need your advice…immediately. Then there’s that speech you just remembered you have to write and deliver tomorrow evening.

As your to-do list grows, it becomes hard to discern which tasks are important and which are unimportant. The priority becomes just getting things done, one after the other. And so the task that just presented itself gets dealt with, the person who is the most persistent gets a response, and the most annoying or difficult job keeps getting pushed to the bottom of the pile.

You’re in good company. Dwight Eisenhower had a lot to do too, even before he became President. But while your normal state is probably frazzled, he wasn’t frazzled at all.

Eisenhower’s philosophy about getting things done came from this belief:

In order to figure out which was which he developed a simple tool, now known as The Eisenhower Matrix. He used this tool to effectively prioritize his tasks, ensuring that the important things got done first and the completely unimportant were ignored unless he had a free minute.

My guess is that he rarely had a free minute. 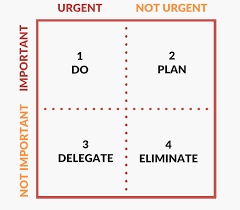 The Matrix is a simple but very powerful tool. There is only one thing you need to decide when something is added to your to-do list: Which quadrant of the matrix does it belong in? Then deal with it in the appropriate timeframe and in the appropriate manner.

Make a copy of the Matrix and keep it with you always. Refer to it every time a text, a call, an email, a request, a job comes your way and see where it fits. Then deal with it appropriately. It won’t take you very long to start prioritizing tasks the minute they land in your lap without needing the Matrix in front of you. Suddenly you’ll notice how much more you accomplish. And how much less frazzled you are.